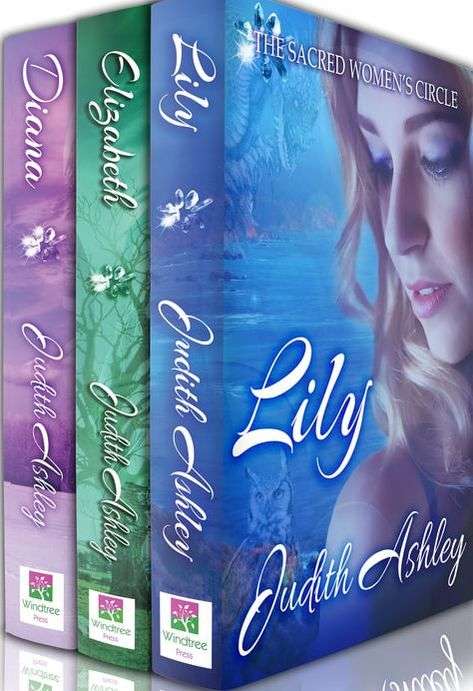 Geriatric care manager, Lily Hughes, and sought-after architect, Jackson Montgomery, clash, first over his mother Eleanor’s care and then over his desire to protect Lily herself. For while Jackson is intrigued by the contrast of her commitment and vulnerability, Lily finds her attraction to him frightening.

She’s been badly hurt by one man—can the support of her Sacred Women’s Circle help Lily figure out how to trust her heart this time, instead of her head?

Elizabeth Elliott’s recurring dream of a vision she’s named The Lady started when she was five. Almost thirty years later, she embarks on this once-in-a-life time trip to Ireland to search for The Lady, the guardian spirit of The Sacred Grove. On the long trans-Atlantic flight, she meets Irishman Michael Murphy. Seeing The Lady’s image when she’s with Michael is a puzzle but gives her the courage to accept Michael’s offer to show her around his country. Falling in love with Ireland? Expected. Falling in love with Michael? The biggest mistake of her life.

To have Michael, she must break her commitment to her spiritual family, her Sacred Women’s Circle. To have The Circle she must turn her back on Michael and a love she never dreamed could be hers.

Diana Pettybone is skilled at The Chameleon Game only showing the world what they want to see. At her circle sister Elizabeth’s wedding, she is faced with the incontrovertible truth, she is in a loveless, soul eating marriage. Leaving her marriage is not easy. Her husband escalates his long standing emotional, mental abuse to physical. To throw her further off balance, a younger man, Matthew Houston, protects her and shows her she is desirable.

The Circle is a haven, a safe place. Can Diana figure out who she really is and what she really wants? And if she wants the unconditional love Matthew offers, where does she get the courage to accept it?